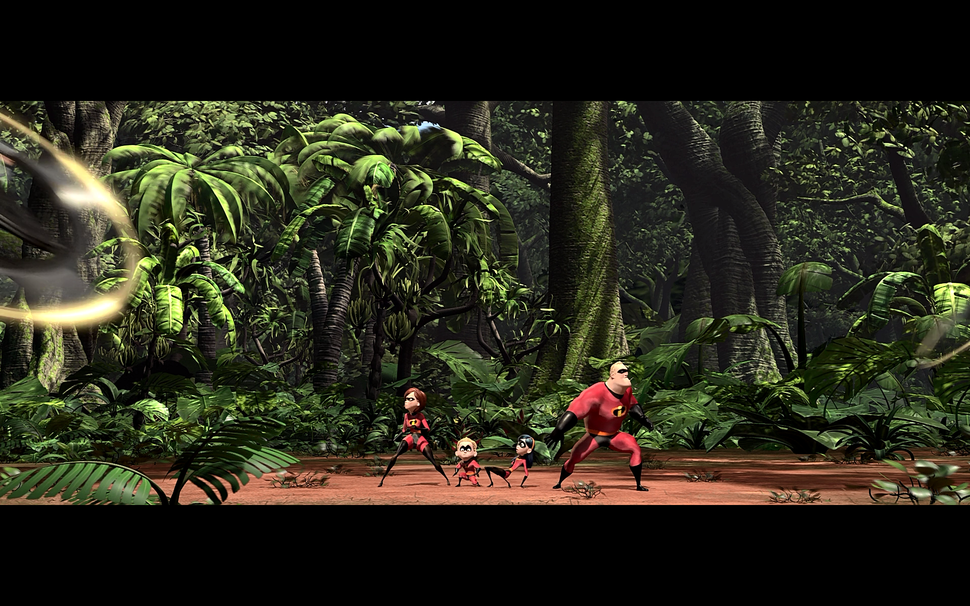 PowerDVD 15, released on April 15 , adds a small set of refinements and yet another trick to make video look better.
Interface and cataloging
PowerDVD is rendered in a riff on the Windows 8/Metro style, which works quite nicely with Windows 10, 8, and 7. It’s easy to navigate the main window and major features, but options could be better organized and placed. While you’re playing music, for instance, the EQ is readily available, but the effects are two dialogs deep. Also, because of the ultra-thin borders and dead-center alignment of stacked dialogs, it can be difficult to tell which elements belong to which. I clicked the wrong “close” button more than once.
On the other hand, Cyberlink has backed off on the automatic cataloging of files. In PowerDVD 14, this proceeded with reckless abandon, sometimes choking your system. PowerDVD also features a “cinema mode”, aka a 10-foot interface; i.e., an interface that can be controlled with a remote control from a distance. To that end, Cyberlink provides both remote-control and playback apps for both Android and iOS.
The PowerDVD librarian is easy to use and offers a battery of cataloging features, but it’s a quirky in spots. For instance, there’s a main heading that says “playlists,” but those are only for music files. As such, it should be under music. I’m being picky, but as I’ve already mentioned, there are other less-than-intuitively placed options, too.
Playback quality
PowerDVD 15 renders movies better than anything else available, and does so without the fuss other players require on the user’s part, such as loading shaders (FX), tweaking contrast and saturation, and so on. The effect on older movies and animated movies is startling—and to be honest—addictive. There’s even after-the-fact video stabilization for home movies.
PowerDVD made even this high bit-rate, 1080 copy of The Incredibles look sharper and more vivid.
The biggest add for version 15 of PowerDVD is some very tasteful color enhancement, called, of course, TrueTheater Color. It’s like turning up the saturation control in other players, but it’s smarter in that it leaves skin tones alone, so there’s no spray-tan effect. Vivid but not cartoonish.
The Cyberlink folks have finally made PowerDVD nearly the equal of Microsoft’s Windows Media Player and Apple’s QuickTime player for augmenting music playback. Though the effects are a bit hard to find (Setting/Player Settings/More Audio), you can now apply Dolby Virtual Speaker and TrueTheater Surround to your tunes. Alas, they only work on a subset of the file types that PowerDVD supports. Sadly, that list doesn’t include FLAC, my go-to codec for all things classical.
Codec support
Two of my continuing gripes about PowerDVD are that it’s a pay program that doesn’t understand DirectShow filters, and that it lacks support for a number of legacy codecs. It handles all the advanced stuff, including everything HD, 4K, and HFR (High Frame Rate), but just some of its fails were FLV with the Sorenson Spark codec, a MPG-PS file with AVC video, Quicktime 6 (Road Pizza), and Ogg Theora. Also, navigating an individual VOB file from a DVD rip hung the player. The DVD rip when launched from the IFO file played fine. Windows Media Player with the LAV filters,Media Player Classic- Home Cinema, and VLC (VideoLAN Player) all played these files with nary a hitch.
Audio file support is much better, with PowerDVD recognizing and playing wave files up to 96kHz/32-bits, 5.1 and 7.1 surround, MP3 and AAC, as well as Windows and Apple Lossless, FLAC, and APE. About the only files it didn’t pick up on were RealMedia and Opus. The only issue is that not-being-able-to-apply Dolby or TrueTheater Surround thing to all files types.
In addition to the ability to play commercial Blu-ray discs, PowerDVD 15 Ultra also has a driver that will allow you to play ISO rips of said discs. MPC-HC and VLC can do that only if you first mount the ISO as a virtual drive using something like Elaborate Bytes’ CloneDrive. And, although it seems that everyone has gotten over 3D for the third time in my lifetime, PowerDVD supports it in both video and photos.
Performance
PowerDVD has never actually stayed on my system for long after a review. Not because of its now shrinking list of peccadilloes, but because it has never been particularly stable and tended to hog system resources. That finally seems to be a thing of the past.
PowerDVD is a now a much more tightly coded program player that uses hardware assist whenever possible. CPU utilization with any reasonably modern processor is quite low, even for 4K videos, so your system will remain responsive during movie playback. It’s not quite as efficient as MPC-HC and its LAV filters, but close enough, especially in light of all the TrueTheater optimization it’s performing.
The playback coup de grace is support for Windows Audio Session Application Program Interface (WASAPI), the high-performance, hardware-direct audio portion of the Windows multimedia libraries available from Vista on. At least it should be. When I engaged the “exclusive” mode of WASAPI which should result in perfect performance, the music skipped occasionally. Go figure.
Online
PowerDVD 15 Ultra interfaces with both YouTube and Vimeo, so you can browse and play videos from those services without firing up a browser. You can also save videos for offline viewing (pinning), and if what you’re looking for is actually just the music, PowerDVD will extract the audio track as an MP3 for offline listening as well. This is of dubious legality, but the whole YouTube thing is iffy to begin with. Caveats aside, both those features are super handy. Especially as you can find lots of stuff on YouTube that can’t be found elsewhere. 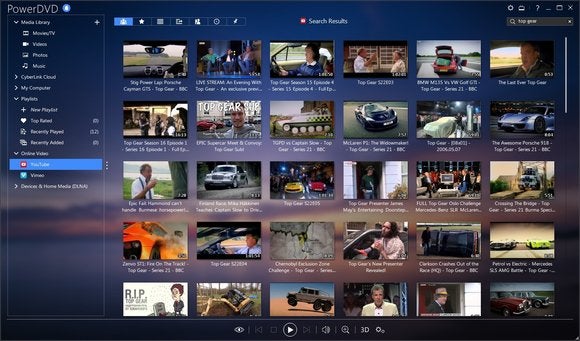 PowerDVD does a great job searching and downloading video, as well as ripping audio tracks from YouTube. But my test version bogged down when other programs were downloading from the Internet at the same time.
The only problem I found with the online browsing was that PowerDVD didn’t like competing for bandwidth. If I was downloading via any other program, the YouTube browser spun its wheels and eventually said nothing was found. Kill the other downloads, and it was happy as a clam.
Versions and pricing
There are three versions of PowerDVD: the $100 Ultra that I looked at, the $80 Pro version, and the $60 Standard SKU. Standard has all the video and audio enhancements, but no support for 3D, HEVC, AVC, and other HD codecs. It’s for making your average video file look nice. I say skip that and stick with MPC-HC or VLC. Pro adds Blu-ray and AVC support. But if you’re going to pay, I say skip that as well and go directly to Ultra which adds the 3D and more, including 20GB of online storage for a year. That’s the simplified breakdown—the myriad differences are charted online at Cyberlink’s Web site.
You can also rent—excuse me—subscribeto PowerDVD 15 Ultra for $15 for three months or $45 per year. The former could be handy if you just need that super-quality picture for a few presentations or the like. But as I said, the picture quality can be addicting.
Should you buy it?
PowerDVD 15 Ultra is the crème de la crèmeof media players, paid or free: It delivers the best picture, support for Blu-ray discs, 3D, and every advanced HD codec under the sun. Is it something most users need? No. I learned a long time ago is that content is considerably more important than presentation. Is it something most users will want? Yes. The picture looks that good.
To those who’ve noted that I said PowerDVD had never taken up permanent residence: Yes, it’s staying. And I’m pretty happy about it.
I’ll be even happier when Cyberlink implements audio effects on all music files, fills the gaps in its legacy video and music codec support, adds subtitle search capabilities, and uses better judgement placing pertinent options.